I find DIY very therapeutic. I lose myself in it because you can concentrate on the task and not think about all of the other stuff going on in your life – Andrea McLean

Discovering any form of home-based damage is always a heartbreaking scenario and it’s the last thing that any of us ever want to deal with or even think about.

But all too often, we find ourselves whether through the vagaries of fate, simple wear and tear, or contractor error, being forced to deal with all manner of disasters and accidental damage that have spoiled what could otherwise have been a great day.

Laminate flooring adds a unique charm to any and all homes that it’s installed in, and while it isn’t as expensive as the hardwood flooring that it does such a good job of imitating, it isn’t exactly cheap either.

That’s why, despite the fact that it’s nearly bulletproof and has designed to take a lifetime of family-based foot punishment,  it’s so frustrating when something goes wrong with it, and it doesn’t quite live up to our incredibly high expectations.

And the major cause of every homeowner’s laminate-based heartbreaking is almost always the appearance of bubbles on one or more of your laminate boards. 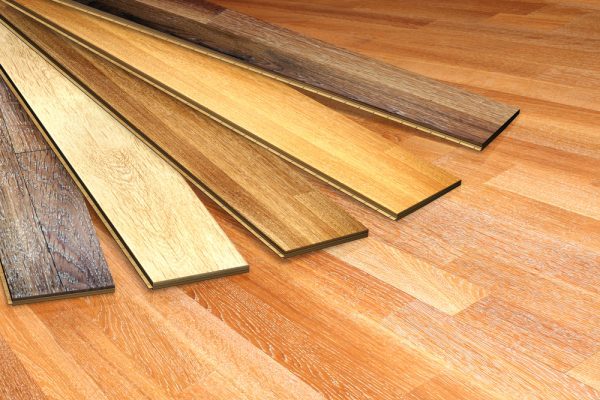 Why Is My Laminate Floor Bubbling?

There’s usually a simple answer for everything and laminate bubbling is no exception. The bubbles that have started appearing on, and in, your laminate boards have almost certainly been caused by excessive moisture.

Knowing the cause isn’t the same as discovering why it’s happening and until you find out how your laminate flooring is being damaged by water, fixing it becomes a moot point.

If you can’t eliminate the problem, then repairing the damage is simply a stop-gap solution that you’ll find yourself returning to time and time again.

Before you decide to repair your bubbling floor, it’s worth doing a little investigative work first in order to discover why it’s happening so that you can prevent it from happening again.

After all, once you’ve dealt with the problem, you’ll be confident in the knowledge that when it’s been repaired, it won’t happen again.

So let’s run through a few possibilities so that we can help you to identify and put an end to the reason your floor has started bubbling.

Believe it or not, water is the cause of most floor and furniture damage. It gets everywhere and unless it’s stopped, it will flow unchecked and continue to wreak havoc on your laminate flooring.

We’re going to let you in on a little secret – despite what your interior designer or the sales assistant at the hardware store may have told you to the contrary, laminate flooring isn’t completely water-resistant.

Yes, it’s waterproof, but it isn’t completely immune to the punishing effects of long-term exposure to water.

Excessive mopping and steam cleaning, water spills that have been left unchecked for too long, or a slow drip leak from a ceiling or pipe can lead to water being absorbed by the boards of your laminate flooring and once the water is in there, it’s in there for good.

All you can do is track the problem back and make sure that it’s taken care of so that it doesn’t happen again.

As soon as that starts to happen, you’ll be faced with no other choice but to repair the affected and damaged boards.

When it gets warm wood expands and when it gets cold it contracts, which is why whenever laminate flooring is fitted, it should be laid with sufficient expansion gaps to allow for the expected expansion and contraction.

A lack of expansion gaps can prove disastrous over time, as the boards expand and contract with fluctuations in temperature, which will result in the boards bubbling, peaking, and buckling as they’re continually pushed into, and pulled away, from each other by the forces of nature.

And while you can’t control nature, you can ensure that it won’t cause your floor to bubble by making sure that your laminate has the expansion space that it needs.

Installation is the key to damage prevention with laminate flooring.

That’s why it should always be fitted by a professional, who understands the necessity for expansion gaps, knows where and how they should be utilized, and also knows the importance of good ventilation and the rules and regulations of laying laminate over concrete and how to prevent any possible issues that it could cause.

How To Fix Bubbles In Laminate Flooring

Once you’ve discovered the cause of your bubbling problem, and have successfully dealt with it so that it won’t happen again, you can move on to repairing your laminate flooring and returning it to its former glory.

Repairing your laminate flooring is a six stage process that needs to be done in order, and each step must be completed before you move on to the next.

If you rush it or try to skip a step, you’ll find yourself stuck up the laminate creek without a paddle and in worse shape than you were when you started.

So remember to follow every step in order and don’t deviate or attempt to take a shortcut. The rules of laminate repair exist for a reason, so follow them to the letter.

The first stage of the repair process involves finding out how many boards you need to replace and where they’re located.

Carefully examine your floor and make a note of which boards are showing signs of bubbling. Then repeat the process again to make sure you were right the first time.

It’s always better to double-check and know exactly how much repair work you have to do before you begin as no-one wants to run into another bubble-based surprise when they think they’re about to finish their repair work.

As soon as you know how many boards you have to repair and where they’re located, remove the laminate molding from the wall that’s closest to the boards that you need to repair.

While it’s easy enough to remove the molding with a hammer and a wood chisel or a screwdriver, remember to do it slowly and carefully so that you don’t damage it as you’ll need to refit the wall molding when you’ve finished.

Work Your Way In

Methodically begin to unlock and remove the laminate boards between the wall and the damaged board, remembering to store them to one side in order, so that they’ll be easy to put back in place once you’ve repaired the damaged board(s).

Repair is, in this case, a slightly misleading term as you’re not going to actually repair the damaged board, you’re going to be replacing it with a new one.

Before you unclip the damaged laminate board, check it’s fitting. If it is too tight and has been given the room to expand that it needs, make sure you take this into account when you’re replacing it.

Work Your Way Back

As soon as you’ve locked the new board in place, work your way back toward the wall you started from, gradually replacing and locking the laminate boards you removed to reach the damaged one in place as you go.

Remember to replace them in the same order that you removed them so that they easily fit together, as flooring has a sort of weird muscle memory and it’s easier to fit a board where it was rather than trying to force it into a space that it’s never occupied before.

The final part of the six-stage process is quite possibly the most satisfying.

The laminate wall molding that you removed earlier so that you could access the laminate boards to replace the defective one?

Simply lock it back into place, dispose of the damaged laminate board and step back, and admire your bubble-free laminate flooring.

Is There An Alternative And Easier Way To Fix Bubbles?

If you’ve located and dealt with the root cause of your bubbling problem, and you’re sure that it’s not going to happen again, you can always attempt to forgo replacing the damaged board and attempt to repair the damage by hand.

While we wouldn’t recommend it, sometimes it is possible to force the trapped air or moisture out of a laminate bubble by hand as long as you do it slowly and carefully.

If you do succeed, it is imperative that you find a way to dry the affected board as quickly as possible and don’t leave any moisture behind, as even the smallest amount can cause the problem to reoccur.

This is why we’d always suggest that you attempt to replace the board rather than opt for a quick fix, as the chances of actually succeeding and successfully repairing an already damaged board aren’t that great.

And most of the time, even if you do succeed the result won’t be anywhere near as aesthetically pleasing as you hoped it would be.

It All Sounds A Little Bit Too Complicated…

If you don’t feel confident enough in your own ability to tackle the job of replacing your bubbling laminate flooring by yourself, don’t worry.

None of us were born to be tradesmen (except for Jimmy Carter who seems to be pretty good at building houses from the ground up), and it’s okay to admit this to ourselves.

That’s why contractors exist, to do the jobs that we can’t.  If you can’t do it, don’t worry, just call a local contractor, explain the problem, and they’ll fix it for you.

After all, that’s what they’re there for.